This Blog features all the reasons why we should buy from local wineries, Chinese owned or not. We must support the local industry. Full stop.

Many of these owners are of course Australian citizens – have invested in Australian infrastructure, pay Australian taxes, employ Australian people of diverse national backgrounds and buy from grape growers and packaging companies and those that provide industry services.

This edited article by Ben Westcott of CNN Business explains the dilemma facing the wine industry in this country.

South Australian winemaker Jarrad White spent almost a decade building his business in China. Then, in a matter of months it fell apart.

It had nothing to do with the quality of White’s wines at his vineyard in McLaren Vale. Instead, it was the result of months of worsening diplomatic frictions between China and Australia.

White lived in Shanghai for several years, setting up a network of distributors to sell his Jarressa Estate wine to the booming Chinese market, where demand for foreign wines among the middle class was growing fast.

By mid-2020, more than 96% of Jaressa Estate’s wines were being sold to consumers in China – up to seven million bottles a year. But in November, Beijing announced crippling tariffs on Australian wine as part of an “anti-dumping investigation” into whether those wines were being sold too cheaply in China. The government said the probe was prompted by complaints from Chinese wine producers.

White says he hasn’t sold a single bottle since. 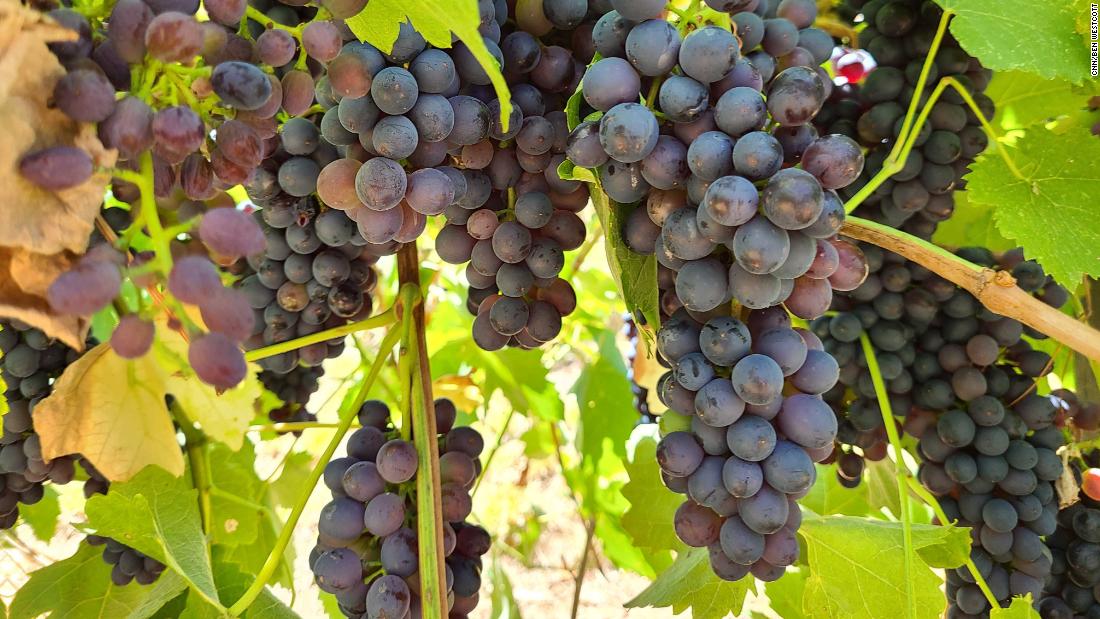 Grapes on the vine at Tahbilk winery in central Victoria in February 2020.

Currently, hundreds of thousands of bottles of Jarressa Estate wine are piled on pallets in a warehouse in Adelaide waiting for the tariffs to be lifted.

“It’s hurting us dramatically. We had a lot of supplies that needed to be paid for and all these orders that were planned to shift, so it’s left us in an awkward situation,” White said.

The value of exports of wine to China dropped to almost zero in December, according to statistics from industry group Wine Australia. The total value of wine exported to China for all of 2020 dropped by 14% to about 1 billion Australian dollars.

China maintains the measures are needed to stop cheap wine imports from depressing the local market. But the Australian wine industry believes it has more to do with worsening tensions between the two countries. 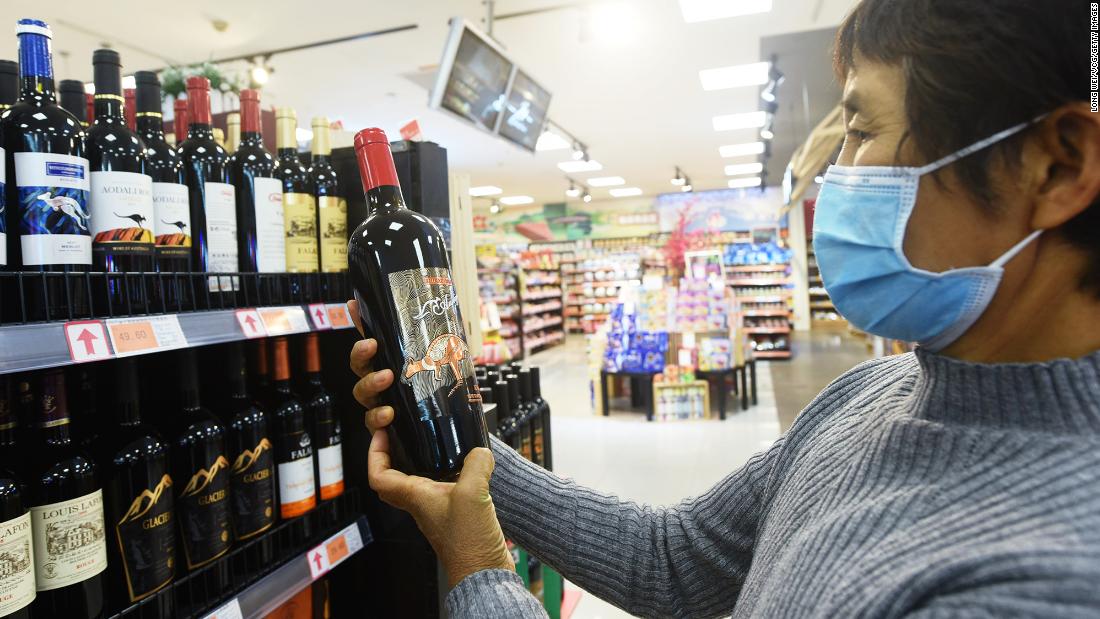 A customer looks at a bottle of wine imported from Australia at a supermarket in November last year in Hangzhou, Zhejiang Provence of China.

Before November, China was Australia’s biggest wine market by far. In 2019, more than a third of the wine that Australia exported went to China. They bought A$1.1 billion from Australian vineyards, according to Wine Australia. That year, Australia sold more wine by value to China than to the United States, United Kingdom and Canada combined.

Alister Purbrick, a fourth-generation wine maker and chief executive of the Tahbilk Group, said that Australia had been building its wine business in China for years, but it had only really taken off after the two countries signed free trade agreement in 2015, which removed 14% tariffs on Australian wine. The removal of tariffs supercharged a growing industry. Between 2008 and 2018, Australia’s wine exports to China jumped from $73 million to over $1 billion.

China’s demand for wine isn’t limited to Australia. France is still the leading exporter of wine to China. Australia comes in second, and there is also strong demand for Chilean labels.

Zheng Li, who owns a wine business in Hangzhou, said he thinks Australian wine has found success in China because it is, in his opinion, better than the wines produced elsewhere — and it’s also cheaper, mostly thanks to the free trade agreement between the two countries. He added that the higher alcohol content is also appealing to Chinese drinkers who are used to baijiu, a popular, strong liquor made from rice.

Another perk: Chinese consumers find the labeling system Australian winemakers use easier to understand than the regional labeling used by European companies, Zheng said. For example, Treasury Wines’ popular Penfolds brand labels its wine by Bins — as in Bin 8, Bin 28, Bin 389 — which refer to where the wine is stored before being sold. Some Australian winemakers also attribute the popularity of Australian wines to what they describe as the country’s clean environment and appealing climate.

“There’s no denying the quality of the Australian wine and the purity of the country, the climate, the product, it’s clean, it’s pure and a very good quality wine, very palatable,” said White from Jarressa Estate.

But the wine boom was also the product of years of work by Australia, which targeted the growing Chinese middle class with advertising and education campaigns, according to Lee McLean, Wine Australia’s general manager of government relations and external affairs. Chinese sommeliers and winemakers were brought to Australia, along with tour groups who would visit vineyards to sample the produce. Purbrick, from the Tahbilk Group, said that some Melbourne vineyards employed Mandarin translators for the Chinese tour groups. 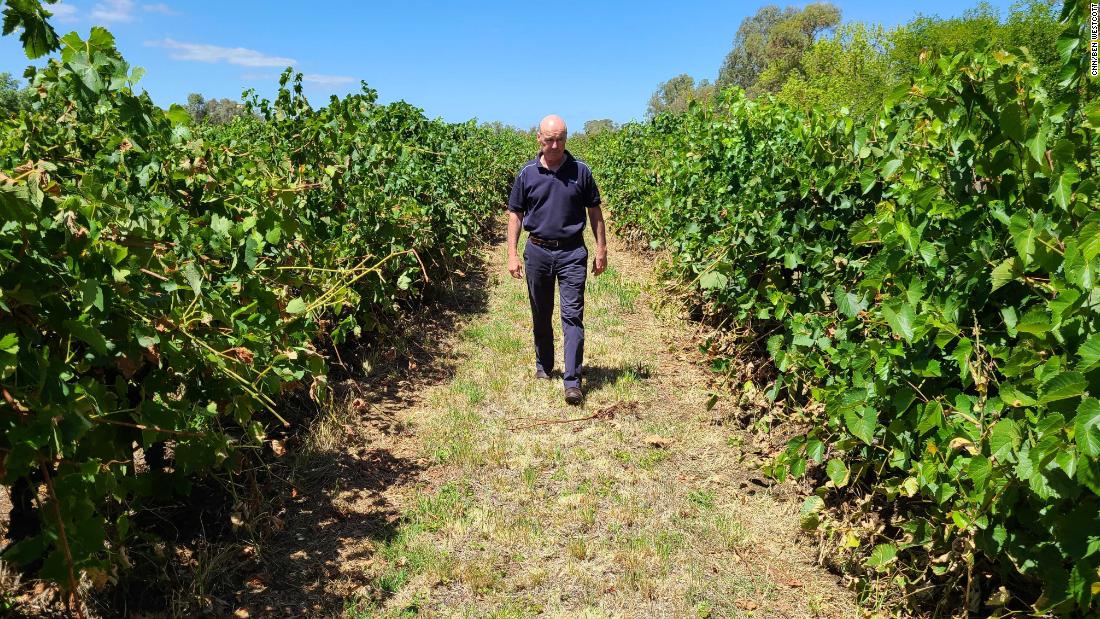 Alister Purbrick, chief executive of the Tahbilk Group, walks through his vineyard.

“Even before the tariffs, Australia’s wine industry was having a difficult year. A series of terrible weather events hurt yields by as much as 40% in the first half of 2020, Purbrick said, including hail storms, drought and the catastrophic summer bushfires which caused “smoke taint” in some vineyards’ harvests.

The coronavirus pandemic, meanwhile, led to reduced orders from China and elsewhere as economic growth slowed around the world.” he explained. But those two effects have been a walk in the park compared to the China effect,” said Purbrick. Political relations between Australia and China began to rapidly deteriorate in April 2020 after Prime Minister Scott Morrison called for an international investigation into the origins of Covid-19.

Shortly afterward, a number of Australian exports — including timber, beef, some types of coal and eventually, wine — began to encounter difficulties entering the China market. In August, the Chinese Ministry of Commerce announced an ‘anti-dumping’ investigation into Australian wine, which led the ministry in November to impose temporary tariffs of up to 212%. It isn’t clear at this stage when the tariffs will expire or be made permanent. 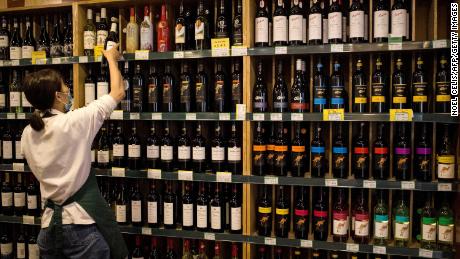 Purbrick said that a quarter of the exports from his family’s Tahbilk Winery, which has operated for more than a century, had been to China. Now that business is gone.”Now it is effectively zero sales, or very small sales, into China,” he said. 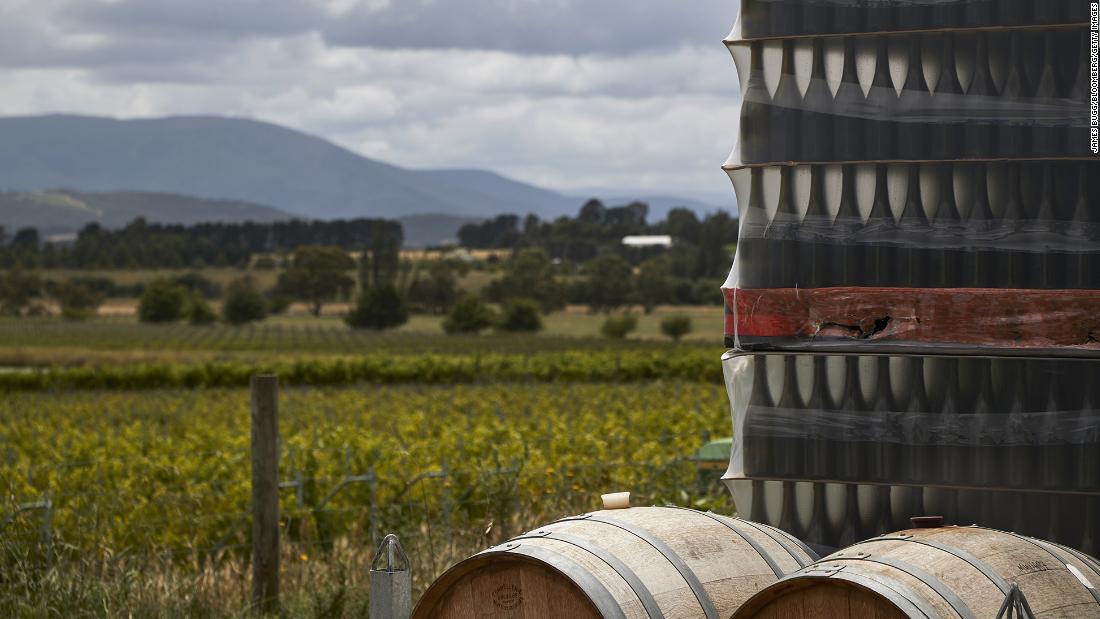 Wine barrels and pallets of bottles are stacked at a winery in the Yarra Valley, Victoria, Australia, on December 7.

Many winemakers in Australia are convinced that the tariffs are political retaliation by China in response to Australia’s calls for an investigation into the Covid-19 pandemic.

“Australia’s only a little nation. We should have absolutely supported it, but we didn’t need to lead the charge,” Purbrick said.

Others in Australia lay some blame at the door of the Chinese wine industry, which they claim pushed for action due to concerns over the growing popularity of Australian wine.

The China Alcoholic Drinks Association said domestic wine production shrank 61% between 2015 and 2019. It firmly pointed the finger at Australia, whose wine exports to China more than doubled over the same period.

In its response, Australian Grape and Wine, Australia’s national association of winegrape and wine producers, said Australian imports were not to blame for the downturn in China’s domestic wine industry.

Quoting analysis by drinks market research firm International Wine and Spirits Research, it said local Chinese wines were “beset by structural problems arising from the rush to increase production during the 1990s and 2000s. These include high costs, unsuitable soils and climates, excessive yields, poor quality and image.”

China’s local wine industry doesn’t have the capacity to meet the growing demand for “high quality wines,” it said, adding that other countries were exporting wine to China in higher volumes and at lower prices than Australia.

Bruce Tyrrell, managing director of Tyrrell’s Wines put it this way: “The sales of domestic Chinese wine started to decline and the Chinese wine markers started to say, ‘Get these bloody Australian winemakers out of our market.'”

Tyrrell said that while China had made up as much as 25% of his business, his winery was now treating it as a non-market. He added: “Somebody said to me, ‘Who are going to be the biggest losers out of this?’ and I said, ‘The Chinese consumers.'”

Whoever is to blame, Australian vineyards are suffering. Even winemakers with no footprint in the China market are now facing a likely drop in domestic wine prices, as vintners flood the Australian market with product they can’t sell overseas.

At the same time, after a difficult 2020 wine harvest, Purbrick said that 2021 was shaping up to be a better harvest than usual, exacerbating problems with a glut of wine which Australian producers can’t export.

“I’m concerned across the whole industry … There’s no winners in a situation like that,” he said.

As some Australian winemakers look overseas for new markets, there are quiet concerns that if the China market goes for good, there simply isn’t anything that can replace it in terms of buying power.

Some vintners say that they are hopeful that India, with its rapidly growing economy and middle class, might be an option, while others said they are looking to develop more obscure markets like Kazakhstan and Uzbekistan.

A new free trade deal with the United Kingdom in the wake of Brexit might also open up opportunities, if it leads to tariffs being reduced on Australian wines coming into Britain.

“The ability to do international travel to look for new markets  and buyers very hard at the moment and takes time and money,” he said. “It isn’t just a matter of, ‘Oh, we have all this stock, let’s ship it to America or Europe.'”

White said that he hoped that the dispute would be resolved within a year, but other vintners aren’t expecting a break anytime soon. “I think the reality is that we are probably facing a situation which is likely to be with us for years rather than months,” said Wine Australia’s Lee McLean.

Two wine importers in China who spoke anonymously, to protect their domestic business, said that the ban wouldn’t affect much of their business as Australian wine could be easily replaced by Chilean wine, which is also produced in the southern hemisphere.

Some winemakers in Australia were doubtful though, saying that while some varieties of Chilean wine may have a similar taste and price, those winemakers couldn’t replace the more high-end Australian labels, such as Penfolds. Even if the tariffs are eased relatively quickly, the episode is likely to reshape Australia’s wine industry into the future.

Whoever is to blame, Australian vineyards are suffering right now.

So with all that I plead that you support the local industry whatever the make up of the vineyard.